What to write a novel about

I shuffled into a lecture theater at the University of Bristol

to listen to a presentation entitled

I was deeply, deeply miserable.

Depression, ironically, was my bread and butter at this time.

I'd spent the last three years of my life

surrounded by filing cabinets in a cramped office

where I helped to administer large-scale trials,

comparing the efficacy of talking therapies,

looking at side effects of antidepressants,

that sort of thing.

And it was good work, and it was important work.

The problem - I wasn't any good at it.

My aptitude for statistics was woeful,

I was slow with databases and spreadsheets.

I'm not especially imaginative with PowerPoint

as will become evident -

I needed a friend to even help me with this.

My heart was elsewhere,

locked away in my drawer at home

with the first 20 pages of a novel

which I've been meaning to write for years.

Only where was the time?

Then slumped at my desk on that rainy spring day,

reminding us that everyone was welcome to attend the lunchtime lecture.

I read the title again:

These things tend to suffer from a lofty verbosity,

translate, "How to be happy?"

I grabbed my coat.

The notes I made during that lecture remain pinned to the corkboard,

above my writing desk five years and one novel later.

They contain no insights in how to shape a compelling plot.

There's nothing on writing convincing dialogue or characterization.

There are no well-worn wisdoms on the importance of cutting adverbs,

But writing a novel demands far more than the words we place on the page.

So today, I present to you

"How to write an award-winning, bestselling first novel,"

or at the very least, to be happier whilst trying.

This is the seven-step guide.

It's guaranteed to work.

Step one: Have specific goals.

The operative word here is "specific."

My pile of pages hidden away at my desk,

my intention to be a writer one day -

it was a start,

but it was too vague.

It didn't bother me that I would put my manuscript aside

for a week, a month, six months at a time.

And why should it?

I'd get there eventually.

to convince ourselves that we're getting there

when actually, we're not.

Then at the other end of the journey,

because it's not so clear when we've achieved them.

I replaced "I want to be a writer,"

something I'm still not actually sure I've achieved,

with "I will write something today."

On the first day, in a frenzy of positivity,

I wrote a page.

The next day, I deleted that page.

But I also wrote a paragraph.

That paragraph went too.

At the end of the first week,

I had written 2,000 words that would never make it into my novel.

But I'd also written what would become the first line.

It was there, waiting.

Step two: Make sure your goals are achievable.

As my novel progressed,

as I knew with greater certainty my central character

and how his story would unfold,

I set myself tougher goals:

"Today, I will fix that irksome issue with the chronology,"

"Next week, I will send off a sample of my writing to a literary agent," etc.

My vague desire to be a novelist, to be a writer had been replaced

And it felt great because they felt achievable.

All too often in life, we set ourselves unachievable goals,

and then we feel really bad about ourselves for failing.

Many writers set themselves a word-count target.

And I tried this as well.

It can be helpful to some people.

And that's not so much, but still, I struggled with it.

So, I set myself an achievable goal instead.

I told myself, "Do you know?

It doesn't really matter if all I write is 10 words.

It doesn't really matter if I delete 50 words.

What I need to do is spend the time at my computer, trying -

I couldn't quit my job,

but I could spend two hours every single evening,

I could spend five hours over the weekend.

And this worked for a while too,

and I progressed, and I was moving the novel on.

But writing can be hard and lonely and disheartening.

I'd sent off a sample of my work to an agent,

and then the rejection letter arrived.

I took that day off.

Of course I took that day off.

I took the week off.

Step three: Be prepared to fail.

I mean, it sounds obvious, doesn't it?

But we can all do with a reminder from time to time,

and I'm pleased that I still have these notes pinned above my desk.

The important thing is to see failures along the way for what they are.

They're setbacks in a longer journey, but they're not the end of the road.

I don't think there can be a person alive,

who hasn't run into some sort of failure in their career.

What about 30 rejection letters?

I would suggest to you that if you get 30 rejection letters for your novel,

there's a chance that your novel isn't any good.

But that's not the same as you not being any good.

However much of ourselves we pour into our writing,

it's never the whole of us.

And besides, you're not trying to be a writer, remember?

You're trying to write this specific novel.

If it doesn't work out, why not try writing another one?

a book which has gotten a great deal of attention and praise,

it wasn't the first novel that I wrote.

It was just the first novel that I got published.

Years before, I wrote a children's book.

It had a talking worm in it.

That novel got a whole heap of rejections.

They weren't all automated rejection.

Some of them were,

but some of the publishers

to say there was something about the style that they liked.

I was being told that I wasn't bad.

The rejection letter for my second debut went a step further.

Step four: Base your affirmations in fact.

I think it's important to give ourselves a pep talk from time to time,

a few words of encouragement.

Writing on the whole is a solitary experience,

and it can be a long time before we hear a praise from anyone else.

But the important thing

is to base the praise that we give ourselves on facts.

If you tell yourself you're the world's most remarkable storyteller,

you've got a pretty long way to fall.

But that sentence you wrote the other day.

That sentence when you captured the precise moment

your protagonist realized the truth.

That was really, really good.

That would stand up in any novel.

You need to savor those moments.

It may be your private burden to suffer the anxieties of writing,

but it is also your unique privilege

to be the first in line to enjoy what you create.

Step five: Be flexible in how you get there.

A hundred pages in, I hit a wall.

Writing a novel is an enormous undertaking,

and we learn so much about ourselves along the way.

Sitting at my desk, even with the private pep talks,

was no longer working out for me.

So, I changed tact.

I never planned to do that from the start, but that doesn't matter.

What matters is your specific achievable goal.

I'd set out to write this novel, not to doing so without help.

And for me, doing the creative writing course was very helpful.

But they can present their own challenges too.

When we share our work with lots of people,

it's all too easy to be buffeted around in the winds of conflicting advice.

This is your novel.

If it does get published, well, it's going to have your name on the cover.

You can't write a book by committee.

That doesn't mean we should ignore advice from other people, far from it.

Say, you write a chapter and you share it with 10 friends,

and all 10 of them come back to you and say,

"The scene with the meringue, it doesn't work."

I think it'd be a good idea to revisit the scene with the meringue.

But if only one of them says the scene with the meringue doesn't work,

well, your opinion counts too.

and can tell you why you haven't achieved it,

that is really useful advice.

If they just don't have a taste for meringue

you need to take responsibility and keep the delicious meringue.

The final step is to focus on what you control.

One way into publishing is to get a literary agent.

That's a way that many people go on to have a book on the shelves.

And if you want to get a literary agent,

you can be sure to select an agent

that is accepting submissions in your genre.

You can look at their submission criteria, and you can fastidiously adhere to them.

These are the things that you control.

What you don't control

is whether the agent chooses to represent you.

If the agent does choose to represent you,

what you don't control is whether or not you get published.

If you do get published,

what you don't control is what the novel's cover will look like,

what you don't control is whether the novel will be reviewed.

If it is reviewed, you don't control whether those reviews will be favorable.

You don't control which shops will stock it,

you don't control if any shops will stock it,

you don't control how many people will buy it,

and you don't control how they will receive it.

So, don't give another thought to writing a best-selling novel,

and don't think about writing an award-winning novel.

Focus, instead, on what you control.

Think about the next sentence,

and you might just be going in the right direction.

Five years on from that rainy spring day,

my novel is on the shelves, and it has been well-received.

It's been better received than the talking worm.

But that doesn't mean that it's all a breeze.

I keep those notes

attached to the pin board above my writing desk,

and I refer to them often.

And I should probably refer to them even more often

because writing is so hard and I often falter.

And as for being a writer, I think that's always a work in progress.

I was asked to write this TED Talk and to come and speak to you today.

And I didn't really know where to start or what I wanted to say.

So, I set myself a specific, achievable goal

to spend an hour at my keyboard.

Here's wishing you every success with your own first novels,

if you want to write a first novel.

Or indeed, here's wishing you every success with whatever your goals are

and much more importantly, every happiness.

Thank you very much. 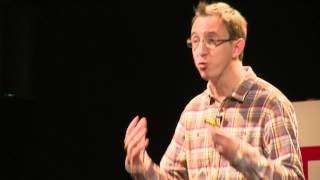 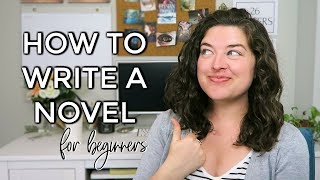 How to Write a Novel for Beginners 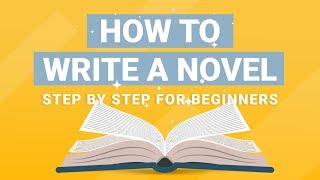 How to Write a Novel: Step by Step Novel Writing Tips & Best Practices 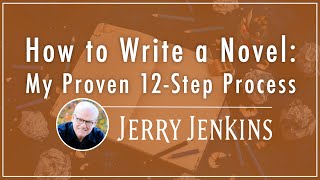 How to Write a Novel: My Proven 12-Step Process 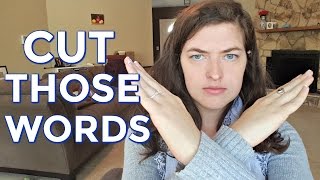 29 Words to Cut From Your Novel 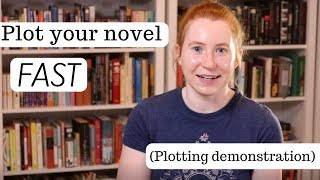 How to Plot Your Novel FAST | Writing Advice 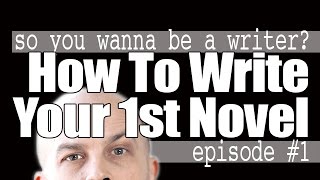 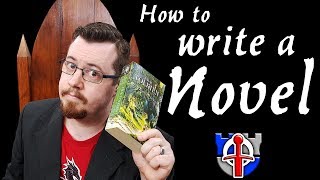 How to write a NOVEL 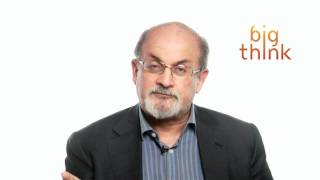 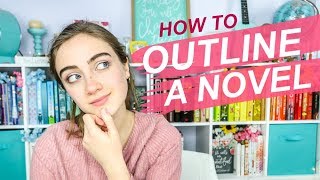 HOW TO OUTLINE A RIVETING NOVEL