What to write a personal essay about

Hi, I'm Rebecca Balcarcel, and I can help you write a personal essay. This is one of

my favorite kinds of writing. It's a little memoir, a little true story about you. That

means you can't make anything up, but it gives you a great chance

to take a slice of your life and find meaning in it. Take a little moment, maybe a trauma

examine it, and it makes you feel like you're living an examined life. Now what kind of

topics might work for this essay? Well, I would sit down and make a list. What are the

three worst things that have ever happened to you? Then, what

are the three best things that have happened to you? And then write down places you've

worked, because you have insider knowledge about those places,

and the reader usually is curious about what kind of insider knowledge you have. You can

reveal things that no one else knows about this place. The same can be said for other

aspects of your life, so write down places you've worked,

knowledge about those places too. You might write down

hobbies you have. Again, you have specialized knowledge about gardening, or horseback riding,

or something. You have stories about how you got started, or the worst thing or the best

thing that has happened to you, related to that

hobby. So hobbies are a good place to find an essay. Think about what wisdom you have.

What do you know about life for sure? And then think, how did I

learn that? And that learning could become the personal essay. Well that should be enough

of a list to get you started. Now when you write the essay, I think you'll do really

well to follow this pattern: Start with action. And what do I

mean by action? Let me read an example. This is an essay about a miscarriage, and I've

adapted it from a real life experience of someone else.

"Blood covered the floor of the bathroom. I tried to stand up, but couldn't reach the

countertop. Alone in the house, I thought of calling my husband, but my phone was charging

in the living room. Tears came. They rolled down my cheeks.

I pushed against the toilet and was able to stand. I didn't feel any better. There would

be no baby." Now notice where I started this, right in the

middle of tension, in the middle of a high-tension moment: blood on the floor. So you need to

airplane, and the movie on the airplane. Or don't write

about the car trip, unless that's the essay, where something really interesting happens

on the car trip. If it's about a trip, start when you're just

stepping out into an important new scene, when you have arrived at an interesting location.

The moment you hear the first strings of the concert, or the moment when you're standing

in front of a piece of art, some moment inside the middle

of the trip, or the most important moment of the trip... Go right into the middle of

your story, find the most high-tension moment, and start the

essay there. And when you start there, don't just talk about what's happening. Show the

reader how you're living it. Put yourself in the moment. Include sensory details, and

things. Let us overhear other people. So you have action, dialogue. Have people moving,

and this will create a scene, and not just a talk-talk moment.

Talk-talk moments are boring, so you want to keep inside of a scene as much as possible,

to keep the reader's interest. The reader will be curious about what happens next, as

long as we have an event going on. So blood on the floor -- we're

immediately in a high-tension moment. Put the reader right there from the first line.

Don't ramp up to it. The first line, show some action. Now

after the action portion -- and this could be a paragraph, or it could be longer -- but

after you've put the reader right in the midst of the action, put background next. So, the

it might take two or three paragraphs, but here's where you can help the reader figure

out what's going on in the action. Who are these people? How

did we get here? The background is your chance to lead us up to that high-tension moment,

and help the reader not be so lost. Let me read you my example. "When the pain started,

I thought it was a normal cramp, or maybe indigestion. I went

about my morning duties: showering and eating cheerios. I daydreamed over a cup of coffee

about naming the baby after my dad. Then..." And you would

go on. Now this is just an example, but you can see how I went back in time. This is a

flashback. So from the blood on the floor, now we go back to that morning, the hours

preceding the blood on the floor. This gives us a sense of who this

is, and what came before the action. The next section should be development. So we have

word, but it means scenes that will tell the story that you want to tell. Maybe you want

to go even further back in time, like my example here: "Even before getting married, we talked

about having a family. My husband was one of three

brothers, and he remembered the fun they'd had. He talked about the time they all climbed

on the roof and jumped off onto the trampoline. On family

trips, they would tell each other ghost stories, and watch for license plates from all fifty

states. I wanted kids too. I knew he longed for a real family, and so did I. When I was

little, I imagined myself..." etc. So I've chosen details,

very specific details that will tell the story of the long past. So the action started with

the blood on the floor, the miscarriage. The next

part, background, told us about that day. Now I'm doing development, and I've gone even further

so this trauma is more understood. Now you may

want to take a different approach and go forward in time from your action. If your action started

at an amazing beginning moment, the moment when you

stepped off the plane and you saw your mother for the first time, or something, then that

might be your action, and your development will take you forward, to adventures with

that person, or whatever the story is you're telling. But

want to stay with specifics, objects, people, dialogue... And

you want to stay in scenes. So show people doing things. Don't let yourself just reminisce

and talk and reflect and introspect the whole time. Do use some of that, because once you

tell an event, then you can reflect on it and say, "Yes,

that's when I first realized this." And you can introspect and reflect and explain your

reaction to the events. But make sure you build this around

events. Development needs to have one or two or three or four events that will let the

reader see the rest of the story, whether it comes before that action portion or after.

of my story." But no, your story is not really the climax. Your realization is the climax.

The moment when you learn something about life that you

didn't know before -- that's the climax. Let me read you my portion: "I realized we were

a real family, even without children. We had a home, we had love. Even if I never became

a mother, I could nurture other people in my life." So this

is learning the life lesson. This is the realization that the experience has taught the speaker.

You need something like that, a time in the piece when

you say, "Here's what I learned. Here's the significance of that event. This is how I'm

different now." And this leads me to talk about the end, which is your last section.

So we have action, background, development, climax, which is

the life lesson, and now end. End needs to be an image. If you can do this, your essay

year for school or for publication. If you end with an image, the reader will be able

to watch you enact this new realization. What do I mean? Let me read the example: "A month

later, I was still keeping the old positive pregnancy test. I

had cried, I had shouted, but I hadn't thrown it away. I pulled it out and thought of all

the love in my life. I thought about the novel I was writing.

My husband's photos smiled at me from a picture frame on the desk. I dropped the white plastic

stick into the trash."

And there's the end. So that action of dropping the pregnancy test into the trash shows the

acceptance. It shows that the life lesson has been learned. She has managed to come

in action. So think of the personal essay as showing the old you, and then the event

that changed you, and then the new you. The ending shows the

new you in action, the new you doing something that the old you would not have done. She

was not ready to let go of this pregnancy test until the end, and she's able to show

us, through her action, that she has arrived at a new place.

So if you can find an action that embodies the change that you have gone through, you

will have an ending image. You can find an action that shows

the new you living the new realization. That's your ending image. If you can do this very

hard part, then you will have a stunning ending to an action-packed essay that's full of specifics

and events, dialogue and action. And your reader

will be feeling wiser just from having read your piece. Alright, well I hope this helps

you write a great essay. Leave me a comment if it gets an

A or gets published. I'll be excited for you. 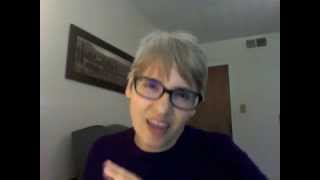 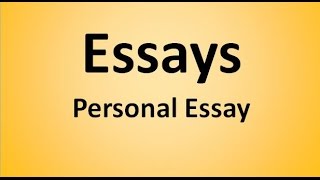 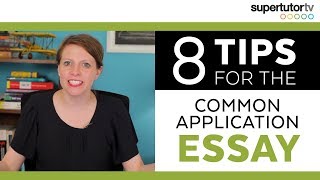 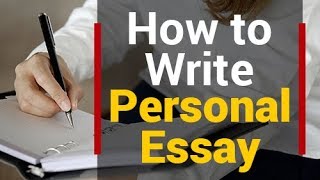 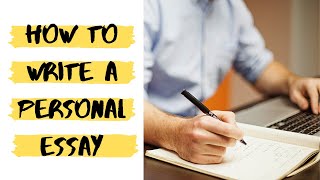 How to write a personal essay 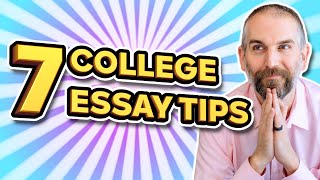 7 GREAT College Essay Tips to Help You Stand Out 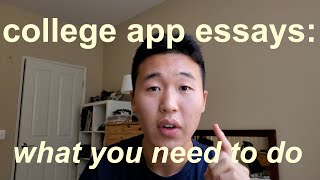 How to Start Writing Your Common App Essay 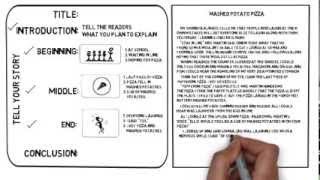 How to write a Personal Narrative Essay 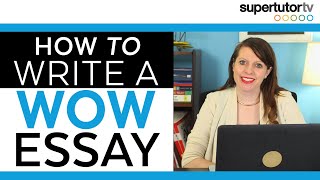 How to Write a WOW College Essay! Tips for the Common App, Coalition App and Personal Statements 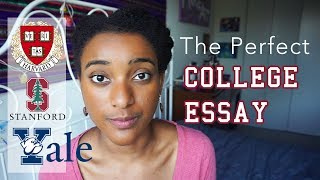